Back to Swedish version

The bedrock of Bottenviken consists largely of magmatic (igneous) rocks formed several billion years ago when magma that had penetrated through the crust crystallized and solidified when cooling. At Kluntarna there is plenty of rock surface that has been polished smooth by glacial movements, where you can get to know some of those rocks better.

Depending on where and how the crystallization of magma has occurred, igneous rocks can be divided into three main subgroups:

when magma penetrates into the surrounding

pre-existing rock and solidifies deep within the

Earth’s crust. Since the cooling and crystallization

Through erosion for many millions of years the rock

is exposed at the surface of the Earth. Examples

include gabbro, granite, diorite and monzonite.

when magma flows out as lava on the surface or

when volcanic ash from gas-rich magma is deposited

after volcanic eruptions. Since cooling and

crystallization are fast, the rocks are often fine-

be distinguished by the naked eye.

Examples are basalt and andesite.

Subvolcanic rocks are intrusive igneous rocks formed near the surface of the crust. They are formed when magma penetrates and stagnates in crevices in the bedrock and often form veins or dikes. Examples are diabase and aplite.

The rock surface at Kluntarna consists mainly of the intrusive igneous rock Haparanda monzonite. This type of rock occurs only in the outer parts of the Luleå archipelago, where it on the other hand is common. The monzonite is coarse porphyritic and consists of various dark feldspar minerals. The composition is similar to granite and granodiorite but with lower quartz content.

In the rock surface, a number of dikes and veins of other intrusive igneous rock types (younger than the surrounding monzonite) can be observed:

Kimberlite occurs in 10-30 cm wide dikes. The rock is weakly magnetic and easily eroded (i.e. soft, making it difficult to detect) and moss green to black in colour. The name is derived from the South African diamond fields, as kimberlite sometimes contains diamonds.

Carbonatite is orange brown in colour and occurs in 5-10 cm wide dikes, which often have a brecciated (fragmented) contact surface against the surrounding bedrock.

Basalt occurs in dikes of 0.5-2 m width and is black-coloured, with traces of fine-grained embedded chalcopyrite. Basalt is fine-grained and can have a vesicular texture, i.e. be pitted with many cavities, where small gas bubbles were formed when the magma solidified. Basalt is the world’s most common volcanic rock.

Aplite is pink coloured and fine-grained and striates the bedrock in dikes from a few cm to several meters width.

Send the answers to the questions below in Swedish or English to CO. You can log the EarthCache immediately, without waiting for approval. If something is amiss, I’ll contact you.

1. Which subvolcanic rocks (intrusive igneous rocks in dikes or veins) can you identify in the proximity of the cache coordinates? Describe the appearance of the rocks (e.g. structure, colour etc.).

By examining the rocks at the site closely (choose a clean surface and, if possible, use a magnifying glass!) you can see how the structure of the dike rocks differ from the surrounding bedrock (grain/crystal size, surface, texture, etc.), and from this make assumptions regarding how the rocks were formed.

2. How do you think these dikes were formed?

3. How do you think the crystallization speed of the dike rocks was compared to that of the surrounding monzonite?

4. (Optional) Take a picture of you and/or your GPS at the site and post in your log! 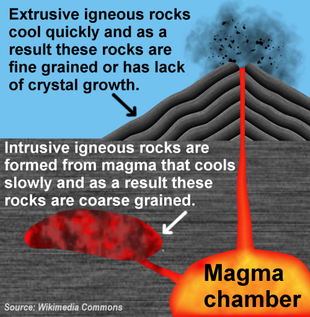